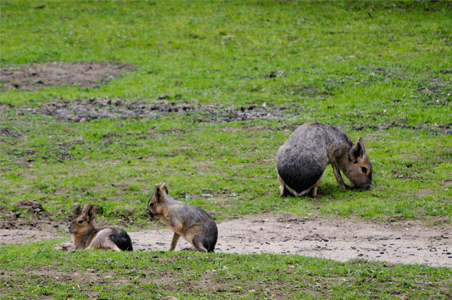 At Flamingo Land, we are pleased to announce that our mara group number has increased this April due to the birth of four youngsters! Two females gave birth to two babies each within a couple of weeks of each other. Female maras usually give birth to two babies at a time so this is normal behaviour. The new additions are settling in well with the rest of the group and can be clearly seen from our Treetop Walkway.

There are two species of mara, Patagonian and Chacoan. Our maras are Patagonian and can be found living in our South American area of the zoo. They are quite an unusual animal, looking slightly like a miniature deer with the head of a hare. Their backs are fairly grey in colour, with a fringe of white towards their rear end, and they have golden brown fur on their front and around their face. Despite being small animals, they are very fast runners due to the use of their strong legs. They are also good at digging out burrows to help keep their young hidden away. They are classified into the same family as guinea pigs and capybaras, which are all native to South America.

When a mara is choosing a partner to mate with it needs to pick wisely as they remain with the same partner throughout their entire life. This is a rare trait amongst mammals as the males usually try to mate with several females to maximise the chances of him fathering multiple young and passing on his genes to them. After mating, the female mara would be pregnant for 90 days and then give birth in a burrow. The female would leave to burrow during the day to feed but return when her young need to suckle. As there may be other young mara sharing the same burrow, the mother would call out and her young would respond and be taken aside to be fed away from the group. The male mara would keep a look out and make sure that other mothers do not return to feed their young at the same time, as too many adults around the burrow would draw the attention of predators.

The mara is a fairly timid animal which would run away from humans or predators. When it is not feeling threatened it would spend its day basking in the sun or eating. As it is a herbivore, it only eats vegetation, however it is not fussy about which type of plant because it has to compete with other larger herbivores for food. The mara population is declining due to the fact that they have to compete for their food, combined with habitat loss and hunting for their skins. 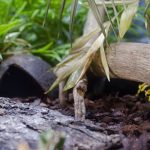 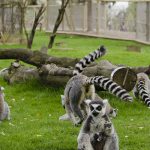