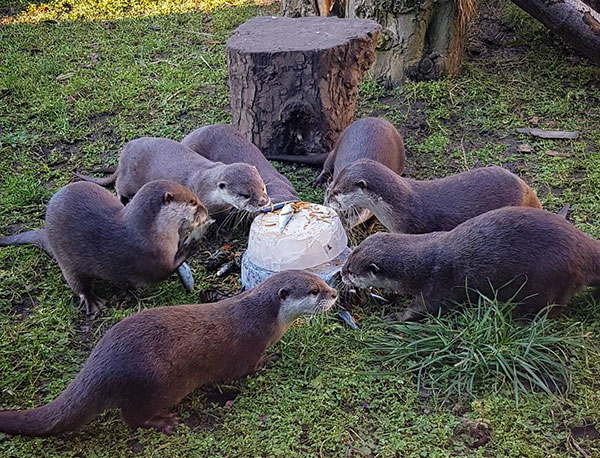 We are celebrating the first birthday of our two youngest otters here at Flamingo Land. On the 4th of February our two female Otters called Bear and Fen enjoyed turning 1 in style by having a very special Otter cake! They were joined by their parents Ruby and Noodles as well as their 2 year old sisters Beatrix, Nerina and Pearl. Their cake consisted of frozen shellfish, mealworms, sprats and crabs!

Out of the 13 species of otters in the world, the Asian short clawed otter is the smallest, reaching less than a metre in length when fully grown. Native to South East Asian countries, such as India, China, Malaysia and Indonesia, these animals are found in habitats where there is water and land, and thus have a varied omnivorous diet. They are very social animals and live in family groups of around a dozen individuals. A range of vocalisations are used to communicate with each other, and they each have a role to play in their social structures. Otters form a monogamous bond and pair for life. Whilst the female will remain the more dominant of the two, the bond between the alphas is strong and without this bond they would not be able to breed successfully. The alpha pair are the only ones that breed within the group, and the youngsters help out with looking after their younger siblings.

The alpha female can have up to two litters a year and have up to 6 kits in each litter. When the kits are first born, they are deaf and blind and so need their mother around the clock. The father of the kits takes good care of his female partner, bringing her food and being responsible for the cleanliness of the den. Noodles, our male otter at the zoo has proved to be a very good dad, being vigilant with food and bedding deliveries. Soon, we are expecting to see the little ones explore the rest of their enclosure and to be taught how to swim by their parents.

The Asian short clawed otter in the wild is listed as Vulnerable by the International Union for the Conservation of Nature (IUCN), they are commonly kept in zoos around the world. Ours at Flamingo Land are part of the European Breeding Programme, and so we are pleased with the success in the otter den. This success shows the bond between the male and female is strong and healthy, which would not happen if the environment was unsuitable. 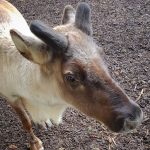 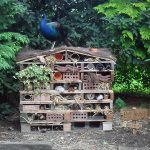