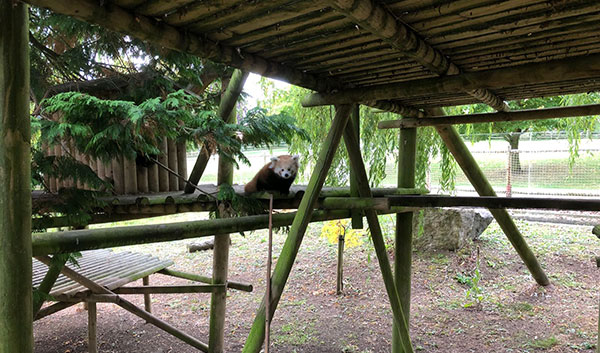 On September 15th we celebrated International Red Panda day here at Flamingo Land. The star of the day was our Panda cub spending time out of his nestbox and not only learning to walk around on his four legs but also climbing around of some of the trees. He is still being helped by mum Tai Jang but he is becoming more active all the time. He was born on the 17th of June so at three months this is the ideal time for our guests to see him. As our Red Pandas are arboreal they do spend a lot of time snoozing up in the trees and can be hard to spot! They are most active during the gloomy hours of dusk and dawn.

The reasons for having a red panda day is unfortunately because their wild habitats in Nepal, China, Bhutan and India are being lost due to deforestation. Red Pandas are also poached for their fur and skins as well as illegal pet trade so now there are just 10,000 adults left in the wild.

The red panda diet consists mainly of bamboo (along with fruit and insects) and this is where they get their name from. ‘Panda’ in the Nepalese language means ‘bamboo eater’ so it shares the same name and territory as the giant panda, despite not being related. Red pandas are more closely related to the racoon and share a similar appearance.

Our Red Pandas are part of an international breeding programme so as our Red Panda cub gets older we will be moving him on to another zoo so he can father cubs of his own in the future. As the climate in the UK is similar to that of their natural habitat they do tend to thrive in captivity in this part of the world. Should it get too cold like it can in the Himalayas then our Red Pandas can wrap their fluffy tails around their bodies like a duvet to keep them warm. Here at the Zoo our Red Pandas could live up to 14 where as in the wild they tend to live 8-10 years. Bai Jiao our male and Tai Jang our female are both 6 whereas our 3 month old male cub is going to be named soon! 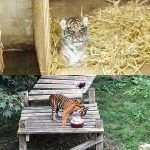