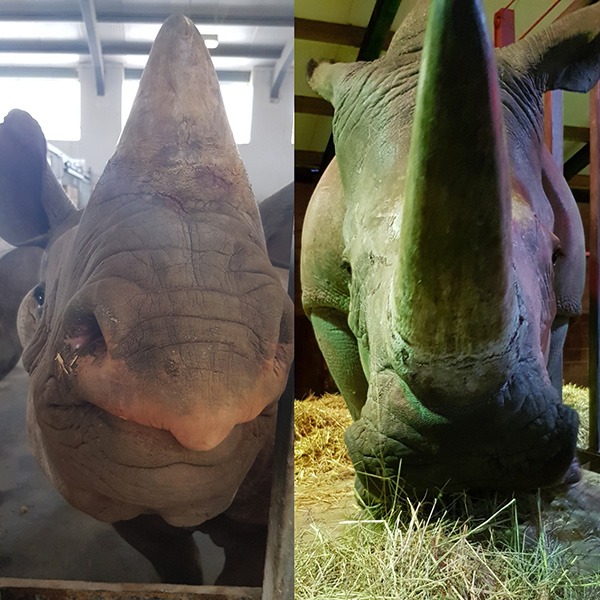 Here at Flamingo Land we are very lucky to have both Black Rhinoceros as well as White Rhinoceros and this week we will be letting you know the differences between the two species. We have four Black Rhinos, one 24 year old male called Baringo and our three females: Olmoti who’s 3, Chanua who’s 5 and Samira who’s 16. We also have our two young male White Rhinos called Bruce and Mabaso who are 2 and 3.

One big difference between the two species of Rhino is the shape of their lip. White Rhinos are grazers and have a very wide shaped lip which is very flexible and enables them to eat more grass in less time. The Black Rhinos however have developed a hooked lip which is designed to pick fruits and leaves selectively from branches. White Rhinos also have a longer forehead and are much larger. White Rhinos can weigh over 2500kg whilst Black Rhinos tend to be between 1000-1500kg. Generally their horns tend to differ also. White rhinos usually have a longer front horn with a much shorter second horn. However black rhinos normally have a slightly shorter front horn and longer second horn compared to white rhinos.

The rhinos’ horn is an important tool, used for digging up roots, branches and defence. It continues to grow as it is made of a protein called keratin, the same protein found in your hair and fingernails. The rhino then have to file it into a desired horn-shape by rubbing it against hard surfaces.

Unfortunately all species of Rhino are poached for their horns. They have all become an endangered species due to man – no other animal can kill an adult rhino. Their horns are mainly used in Asian medicines and for carving into ornaments. Other threats include habitat alteration and political conflict. It is currently illegal to trade rhino and their products internationally. As well as being hunted extensively for their horns, man is slowly destroying the rhino’s natural habitat. Left alone, the rhino can easily live to 45 years old.

Here at Flamingo Land we are attempting to breed Black Rhinos as we have an adult male and 3 unrelated females. Rhinos are pregnant for 14 months, so it is a long term project! However with our White Rhinos we have two younger males that we look after here until they reach maturity around the age of 7 and then they can move on to another zoo which has females and be part of a breeding group. Here you can see the difference between the two species with a close up of Olmoti one of our Black Rhinos on the left and Bruce one of our White Rhinos on the right. 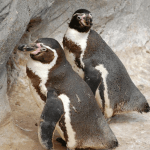