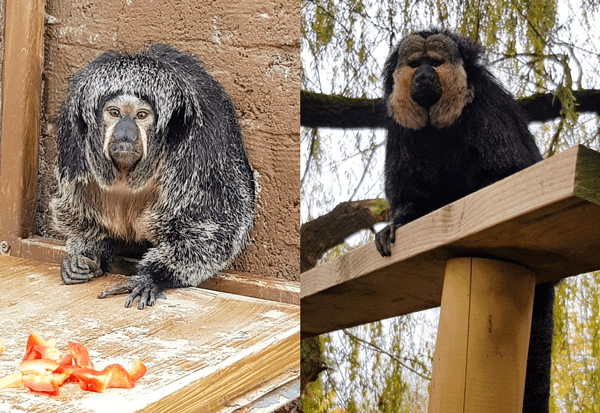 Here at Flamingo Land we have 3 White-faced Saki Monkeys. Now they can be hard to spot as they have their own island opposite the flamingos and spend a lot of time up in the trees. Curu our oldest male is 12, our female is called Hermione aged 4 and our youngest male is called Ron aged 3.

Males are black all over with the exception of a facial disc of “blonde” hair, whereas the female lacks the facial disc and is brownish black. Their legs are extremely strong, which is how they can leap between trees without being able to swing from their tails. Saki monkeys are most active during the day, and spend nights curled up in tree branches. Their tails are even longer than the rest of their bodies! Should they feel threatened they try to make themselves look as big as possible with their fluffy bodies and screech at what could be a potential predator.

Females give birth to a single baby after 150 to 180 day gestation. Both sexes of offspring are of a similar colour to adult females, with males developing the blonde facial disc after around 2 months. The young are weaned after 4 months, and are fully mature in 3 years and have a life expectancy of 30 years. They tend to mate for life with one partner and build social bonds by grooming one another. Here at the zoo we feed them with a wide range of vegetables, nuts as well as some meat.

They live in a large section of northern and central South America. Their range extends from the Amazonian region of Brazil, north into Colombia, and west into Ecuador, Peru, and northern Bolivia. Their habitat is mainly the Amazon rainforest. They are lucky that they are fairly adaptable monkeys and can live in secondary forest, which has been cut down by humans and then regrown. Of course they prefer primary, mature forests. These monkeys can also be found in the flooded forests and swamps that are scattered throughout the Amazon rainforest. Deforestation and illegal pet trade are some of the huge threats that White-faced Saki Monkeys and many other species suffer from in the wild. 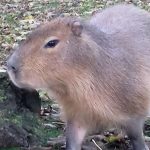 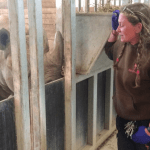