Our award winning zoo and a selection of attractions for families and younger children is now open! Find out more
Scroll down

The project has a holistic approach, working not only to conserve and research threatened species, but also their habitats. Most importantly the project will also aim to train local people, improve livelihoods, and advertise the biodiversity, importance and beauty of the Udzungwa Mountains. 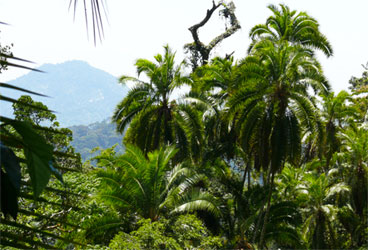 The major work of UFP is to provide support to conservation planning in an important forest just to the east of the Udzungwa Mountains. Magombera Forest lies about 6km from the main Udzungwa range and like all forests has importance for local communities, by supplying water, and providing natural resources such as herbal medicines and firewood. The remaining forest is also very important for biodiversity. For example over 40% of the trees are either on international red lists of threatened species or known only from the forests of East Africa. The forest also has the highest concentration of endangered Udzungwa red colobus monkeys (Procolobus gordonorum) anywhere and is an important dry season refuge for elephants of the Selous Game Reserve. Magombera is also one of two known localities of the newly described Magombera chameleon (Kinyongia magomberae), discovered by a team of scientists including Flamingo Land’s Director of Conservation Science, Dr. Andy Marshall.

Conservation monitoring is the process of collecting scientific data on changes in conditions over time so that the health of a habitat can be assessed. This is important to ensure successful conservation of habitats, however only a very low proportion of protected areas in Africa have long-term monitoring programs. Under the supervision of Project Co-ordinator Samuel Mtoka, UFP’s Research Assistants are surveying illegal forest use such as cutting of trees, setting of fires, and hunting. “Indicators” are also monitored that represent the conservation value of the forest, including species of conservation concern such as rare monkeys and small forest antelopes. The size and species of trees in the forest is also assessed every two years as these are the structure of the forest. The results of monitoring are used as an indicator of management success, and a tool for local education.

Lowland tropical forest such as that found in Magombera, is one of the world’s most threatened habitats. Until the late half of this century the area where Magombera is found contained extensive forest. However much of the forest was cleared for commercial agriculture, through the felling of thousands of trees and shooting several hundred elephants. The remaining forest is only around 12 square kilometres (about one quarter of its size in the 1970s) and is the last remaining forest in the northern end of a huge valley (Kilombero). The chequered past and uncertain future of Magombera forest have led UFP to assist local communities to safeguard the future of the forest through village-led patrols, developing forestoration methods, and improved communication of conservation concerns to national and regional managers. Conservatists and local communities hope that one day the forest will be granted protected status so that it’s future can be secured.

Upon initiation of the project local village councils were asked to rank the aspects of UFP’s work in order of priority to them. Independently all five villages ranked education on the environment and conservation as the number one priority. Accordingly UFP’s Education Assistant Bruno Tewele, conducts daily lessons in several primary schools in the villages surrounding Magombera forest. Each year UFP also assists school children with tuition fees so that they can attend secondary school. Most children in Tanzania do not attend secondary school, particularly those living in remote villages, where people are very poor and where schools are few. Each year these children send letters and essays to Flamingo Land that describe their studies and their lives. Education of local people will remain a number one priority for UFP.

Alongside routine forest monitoring, research projects under UFP are aiming to improve scientific knowledge of the region’s forests, animals and people, that will help improve forest conservation. Tanzanian Research Assistants and Flamingo Land zoo keeper Holly Garson are together researching the dietary needs of the two species of colobus monkey resident to Magombera forest. The Udzungwa red colobus and Angolan black and white colobus live together in the same social groups, and so our research is aiming to understand how these species divide their resources. Our primate research also extends to the critically endangered kipunji monkey (Rungwecebus kipunji) discovered new to science in 2004 and one of the world’s rarest primates. The reason for its restricted range is a mystery, and so our surveys are aiming to determine the role of habitat. PhD student Julia Latham from the University of York is also investigating the implications of conservation for local people. Without the support of the indigenous community, conservation efforts are unlikely to succeed.

Without visiting the Udzungwa forest and seeing its majestic mountains for yourself, there’s no way of really appreciating the...
Read More