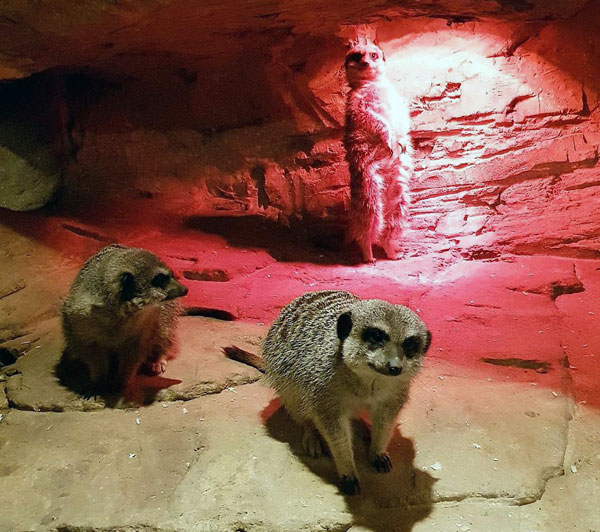 At Flamingo Land we have two groups of meerkats. Our largest group is found in Children’s Planet and it is made up of six individuals so they have lots of social interactions between the members of their group. The other group is by baboon island where we have an older group consisting of two females and a male. The collective noun for meerkats is a mob! The meerkats sometimes huddle together to share body heat on chilly days. Grooming may occur to help clean each other’s fur and strengthen relationships. Also, there should always be at least one meerkat on look out, or sentry duty, to make the group aware if there are any dangers or predators about. Each member of the group will participate in sentry duty as they take it in turns to make sure one member doesn’t get stuck doing it for too long. The meerkats have developed a range of vocalisations to communicate with the rest of the group such as purrs, growls and alarm calls to distinguish between different behaviours and threats they may see.

Meerkats generally live to be around 13 years old in captivity; however during this time they may never mate and raise offspring of their own. The mob of meerkats usually contains one alpha male and female who are the only individuals permitted to mate. Other members of the group will help to raise any young from the alpha pair, and females can even lactate to help feed them. Three is the average litter size for meerkats and they can be born any time of year, but it is usually during the summer months. The litter would stay underground in a burrow for the first three weeks of their life and then they would join the rest of the group to benefit from their protection from predators, such as eagles and jackals.

The meerkats’ diet can consist of a range of items. They are omnivores so therefore eat a variety of insects, lizards, snakes, scorpions, eggs, fungi and fruit. Our meerkats are also very fond of dry cat food! They have very sharp teeth and claws therefore are able to dig burrows and search for food. Young meerkats will often shadow an adult so they can learn how to hunt the trickier animals such as scorpions and snakes! 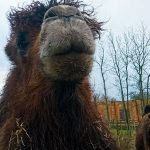 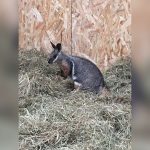