Too Chilly For Our Penguins?

One of the more festive animals to see at the zoo is of course our Penguins. Here at Flamingo Land we have a colony of twenty-two Humboldt Penguins. Penguins tend to be associated with very cold climates however our species come from the Pacific coastline of Chile and Peru. This means they are more adapted to a hot climate as opposed to the snow that has been falling upon North Yorkshire in recent weeks! They can still be seen swimming around in their pool but some may prefer to stay inside within their nest boxes.

There are 17different types of penguin all of which live in the southern hemisphere. The Humboldt penguins, also known as Chilean or Peruvian penguins, live in small colonies and are a medium sized penguin, weighing no more than 13 pounds when fully grown. Humboldt penguins are classed as vulnerable as there is thought to be around 12,000 of them left in the wild and this number is still declining, this is mostly due to over fishing, climate change and habitat destruction, this species has been declining over the last thirty years so breeding efforts in zoos are incredibly important.

Penguins nest on dry land, in disused animal burrows or between rocks and crevices, at Flamingo Land we have purpose built nest boxes that blend in to the rock wall in the penguin enclosure. Humboldt penguins are generally monogamous and will breed in the same pair every year, both members of the pair will share equal duties in raising the chick. This species also displays same sex pairings, there have been several cases in zoos when a pair of two male Humboldt penguins have successfully reared an abandoned egg in exactly the same way that a male-female pair would.

These penguins reach maturity at around 3 years old and can begin to reproduce from that age, the females will lay eggs in the nest or burrows that they have made to protect them from predators, they can lay up to two eggs at a time and the male and female will take it in turns to keep the eggs warm until they hatch, this can take around 40 days. Once the chick has hatched it is very dependent on its’ parents and will stay in the safety of the nest whilst the parents hunt for fish and bring food back to the chicks. 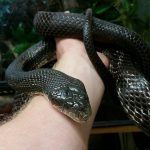 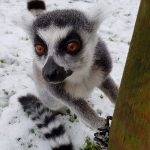