Walk With Our Lemurs 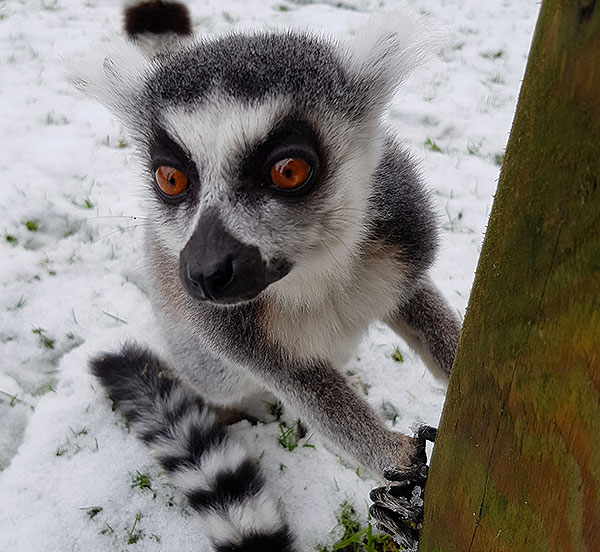 Take a walk through our Lemur enclosure this winter for the chance to see our ring tailed lemurs up close. Here at Flamingo Land we have a troop of 14 females lead by our oldest and most dominant female – Ruth.

They are very confident and will probably join you on the path while you view their exhibit with lots of trees and climbing frames for them to enjoy. They also have a lovely warm house to stay in too if it gets too chilly this time of year! The walkthrough is open from 12:00pm until 2.10pm, but you will still be able to see them from the outside as well.

This species is very easy to distinguish, with its grey/brown fur on its back, white fronts, black eyes, and black and white banded tail. It is generally quite active during the day time, however when sleeping they will often curl up into a ball, wrapping its tail around itself.

Group sizes can reach up to 25 individuals with the females being the dominant one of the sexes. One alpha female will be in charge, with the other individuals following in a hierarchy.

This species has many human threats in the wild such as habitat loss, hunted for food, capture for the pet trade and charcoal production. It is also at risk of being predated upon by the fossa (the largest predator on the island) and birds of prey.